skip to main | skip to sidebar

This says it all: 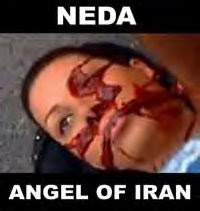 Neda was murdered by Iran's thugs while peacefully protesting the (most likely forged) election results.

Too bad Obama is primarily concerned about not overstating our disgust with the Islamic totalitarian regime. We wouldn't want to endanger our future (and surely futile) "dialogs" with these thugs.

BTW: Have you read The Truth about Muhammad (by Robert Spencer) yet? No? Shame on you!
(a lot of the book can be read online at that link for free!)
Posted by Peter Reaper at 14:48 213 comments:

The Koran Cannot be Reinterpreted

Here's a letter by Hamid Varzi from Tehran, Iran to the editor in the International Herald Tribune. He likely knows a "bit" more about Islam than you do. Hamid confirms what many experts have stated and what so many refuse to accept: The Koran is misogynous, and it cannot be reinterpreted to be compatible with modern values.

The problem with Nadira Artyk's argument that the Koran treats men and women equally is that for every passage that supports her viewpoint there is another passage that contradicts it ("Reclaiming my religion," Views, Nov. 29).

Artyk quotes several enlightened passages that defend women's rights but ignores those that define women as possessions of men.

Any attempt to reinterpret or ignore those passages that are deeply demeaning and restrictive to women is self-defeating, as Muslims consider the Koran to be the direct word of God and consider its reinterpretation, dilution or adaptation to the modern world to be heresy.

There is no such thing as "Koran Light" and any official attempt at an "Islamic Reformation" will be brutally confronted.

Those Muslim nations that have adapted their civil laws to modern times, like the United Arab Emirates, never dared to "modernize" the Koran but simply circumvented it in the national interest and created a parallel world.

Fitna the Movie: Geert Wilders' film about the Quran 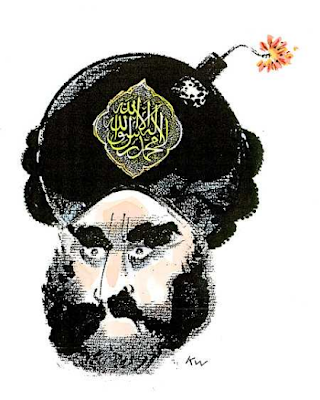 In solidarity with the brave Danish journalists and other bloggers around the world who risk their lives by merely publishing a cartoon(!).

This cartoon(!) was enough of a "reason" for Muslims around the world to riot, vandalize, threaten, and murder. They choose to actively follow a religion that specifically demands such barbaric acts. Just think what it will be like on your street when Muslims are there in any number. Will you still feel "free" to speak your mind? Today it's a cartoon, tomorrow it's your pork hot dog, later it's merely the fact that you are not Muslim (a kafir or dhimmi) that incurs their rage...

The following stance can really only be understood if you have read the Qur'an (final word of Allah) and the Sunnah (Mohamed's perverted & murderous life, which is an absolute guide for Muslims lives).

If you are interested in free speech, how the lack thereof in China may affect us in the near future, and what you can do about it, then this article by Roger L. Simon is well worth a read: Not Blogging the Beijing Olympics.

For some years now, the Internet has been a battleground between freedom of expression and censorship. Bloggers have been taken into custody for publishing their opinions in China, Iran and Egypt, among other places.

In China particularly—and motivated by what could only be corporate greed—three flagship American tech companies—Yahoo, Google and Microsoft—have sadly been the aiders and abetters of this totalitarian repression.

As best as I can, I plan on not watching the Olympics in China and will do my best to avoid (boycott) products that are advertised there. I hope some of you will do the same.

Catchy quotes to remember and to remind you:

"The War On Britains Jews"


Well, the media has finally realized that it is currently the left that is anti-semitic on a large scale. What they have not (yet?) realized is that the left (just like the right) is totalitarian. I just hope that the majority of Europeans will realize that the Jews are at the front against Islamic totalitarianism, and that it is our freedom that will fall next.
Posted by Peter Reaper at 16:04 1 comment:

The German hardware store "Obi" first withdrew its ad campaign to have huge posters of the seven world wonders on the store floors because one of the wonders is the Taj Mahal, which apparently has the Koran text on it, and Muslims might be offended by unbelievers walking on a copy of the Koran (and Muslims are easily offended).

The real problem with Obi came when it threatened a well-known blogger (PoliticallyIncorrect.de) with legal action if it didn't remove an article that was critical of Obi for being overly sensitive to (potential and possibly faked) feelings of Muslims. Succinctly: Obi stifled the free speech of a western blogger in order to appease some Muslims that would want to control what images we are allowed to display.

My suggestion: Don't buy at Obi if you want to send the message that you value freedom. There are numerous other hardware stores in Germany.

This illustrates how corrupt and anti-truth the UN is:

When the UN is being used by bad people for destructive purposes more than it enforces peace, then it is time to think about not making Americans pay their tax money to fund this institution. A simple cost-benefit analysis seems badly needed here.

Found at Politically Incorrect. The young man in the video is Hillel Neuerfrom and is the Executive Director of UN Watch.

Elizabeth Cassidy of Opinio Juris compared this speech to numerous other speeches, and wonders why this is...

The First-Ever "Inadmissible" Speech at the UN Human Rights Council
On Friday, UN Watch Executive Director Hillel Neuer gave a speech at the Human Rights Council sharply criticizing its record of ignoring gross human rights violations worldwide unless they can be blamed on Israel. [...] In an unprecedented reaction, the Council's Chair, Luis Alfonso De Alba of Mexico, refused to thank UN Watch for its statement and said that it was "inadmissible." Ours is the only speech from that day that was not posted on the Council's extranet. So much for freedom of opinion and expression, in the Council at least. (The video of the speech is on YouTube and, through word of mouth and the blogosphere, it has now received over 90,000 hits.)

Over the past year in the Council, ambassadors have called each other, UN experts, and representatives of NGOs "ignorant" and other similar insults. Sudan and its allies have denied the existence of human rights violations in Darfur, and Iran has denied the Holocaust. Nigeria has defended the use of the death penalty by stoning against homosexuals. The invective against Israel has included accusations of "an Israeli Holocaust against the Palestinian people," a "thirst for the blood" of civilians, and of being "an apartheid regime" and even "an invader from the planet Mars." The United States has been accused of running a "concentration camp" at Guantanamo Bay and of "genocide" against Cuba. The United Kingdom has been called a "colonial slave-master." Sweden has been accused of "ethnic cleansing" against anyone who does not have the coloring of "former Viking conquerors." Yet all of these statements, and many others like them, have been thanked and deemed admissible by the Council Chair.

Here is a video showing all the attacks, lies, and insults that are admissible:

Prequel: The Speeches not Banned at UN Human Rights Council.


The major difference: It is OK to insult Israel, and occasionally the council, but it is not OK for Israel to point out attacks, lies, and insults against Israel. The hypocrisy is repulsive.

So, with all the damage the UN is doing, what exactly is the good it's doing that would justify the bad it's doing and the UN's continuing existence? I just don't see it.
Posted by Peter Reaper at 12:45 2 comments:

Separation of Church and State in America - Here's the Proof

Here's a good synopsis of an important and often misunderstood subject: The History of the Separation of Church and State in America

One of the most relevant statements is:

"There is often debate about what exactly the First Amendment means, however, in an 1802 letter to the Danbury Baptists, Thomas Jefferson made clear that the purpose of the First Amendment was to establish a "wall of separation" between Church and State in order to protect individuals' right of conscience"

Seems pretty clear and obvious to me what Thomas Jefferson meant. So, no more "in God we trust" on our money, no more graduation ceremonies and election stations in churces, and no ten commandments in public buildings. Period. I don't vote for putting "God doesn't exist" on the entrance of every public building either.
Posted by Peter Reaper at 18:10 2 comments:

A must-read for all Germans (who, unfortunately, are still largely anti-Semitic): Nahostexpertologie.

Here's a (somewhat difficult-to-read) Google translation of the article into English.